From The Desk of Deacon Ed

The Last Supper discourse in the Gospel of John (14: I - 17:26) is a farewell discourse. In today's Gospel, for example, Jesus says, "I am going away and I will come back to you". Christ consoles his disciples at the thought of his departure with a number of significant promises.

To one who loves him, Jesus promises that the Father and he "will come to him and make our dwelling with him". This dwelling begins in this life and reaches its perfection at the time of the parousia, the Second Coming of Jesus. Christ also sounds the note of joy because he is leaving to return to his Father, having completed the work of salvation assigned to him by the Father.

Another important promise is that the Father will send them the Advocate, the Holy Spirit, as their teacher. He will help them understand and put into practice the teachings of Jesus that they had received. This will be the ongoing role of the Holy Spirit for the church and for each Christian.

A third promise for Jesus' followers is peace. The biblical concept of peace involves far more than the absence of hostility. It is a positive term, denoting the fullness, the perfection of God's blessings. This indwelling of Father and Son in the followers of Jesus is one of the fruits of peace.

In today's Gospel Jesus says that "the Father is greater than I". Earlier in John's Gospel he said, "The Father and I are one". Since the Father sent Jesus to carry out the divine purposes, the Father can be seen as greater than the one sent.

Much later in Saint John's life, when he was exiled to the Isle of Patmos presumably because of his faith and because of the ways his remembering shaped both his own life and the lives of numerous others, he continued to remember and to imagine. What he remembered then was the way that Jesus had been their dream, the divine center of their lives. Jesus had been all they wished for, all they hoped they could be. That's what John remembered and was unwilling to forget. Let us all remember the promises of Christ and believe!

Your brother in Christ,

All parishioners who wish to view a livestreamed mass at St. Joseph but do not have a Facebook can click the link provided when it becomes available to join in.

Please continue to keep our parishioners who have COVID-19 in your prayers and for a cure to the end of this pandemic as well as those involved in the Ukraine conflict.

Please share our mass with your family and friends and be safe.

Spirit Choir
Saturday: 11 a.m.
Gathering: Here I am To Worship
Gifts: You Are My All in All
Communion: How Beautiful
Communion Med: In Jesus Name
Sending Forth: You Are Holy (Prince of Peace)

St. Joseph Catholic Church has created an online tithing area as a means for those parishioners who can't attend Sunday services due to the ongoing COVID-19 pandemic. Your contribution to our parish is greatly appreciated. Thank You! 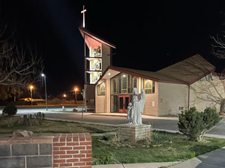 Want to become a member of our Parish? Click HERE to download our registration form. Fill the form out, print and bring it to our office during office hours or any mass on the weekends. Call if you have any questions.

Click the icon below to download Adobe Acrobat Reader if you do not have it installed on your computer.

The Knights of Columbus (KOC) of St. Joseph (#9456) have introduced a new program called "The Holy Family" 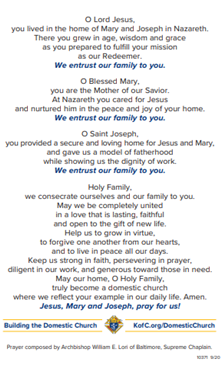 Attention parishioners, those who currently have taken home the Holy Family (Coros Program), please be sure to bring it back to the sacristy on the Saturday/Sunday after you received it so we can present it to another family at the next mass.  Thank You!

The 2022 Breaking Bread Book is available. If you do not have one, you can purchase one before or after mass for $5 in the church.

Anyone who is a current lector or usher at St. Joseph Catholic Church, please contact Marcos LeBlanc at saintjosephmarcos@gmail.com  or at the office 719-544-1886 ext. 108

The Heart of Roselawn 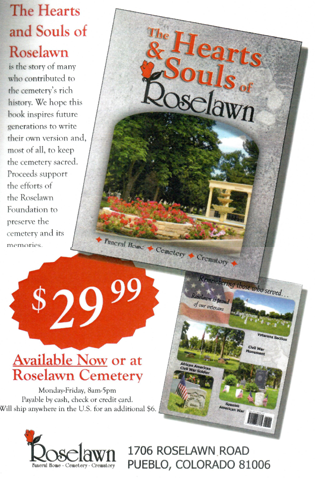 We have 105 guests and no members online

What The People Say...