The tradition of bountiful St. Joseph's Day tables will be carried oln this weekend at St. Joseph's Catholic Church in Blende, Pueblo County.

For the ninth consecutive year, the large cross-shaped table inside Father Charles Murray Hall will be adorned with traditional St. Joseph's Day breads, fava beans, frittatas, vegetables, eggs, fish, fried bread crumbs, cakes and a host of sweets from Sicily, where the tradition began centuries ago.

Among the treats that will make mouths water are lady fingers, cream puffs, honey balls, cannoli and wine cookies.

The Catholic feast day dedicated to Saint Joseph falls on March 19. It honors the foster father of Jesus Christ and patron saint of the Universal Catholic Church, who is beloved by many Sicilian Americans.

"My dad was Sicilian... I grew up with St. Joseph as my patron saint from when I was little," said Patricia Klomp, chair of the church's St. Joseph's Day table committee.

"He is very special to me."

Sicilian immigrants came to the United States in large numbers in the 19th and 20th centuries, bringing with them the tradition of St. Joseph's Day tables. The tradition is believed to have started in Sicily when peasants prayed to St. Joseph during a period of famine and drought.

"They didn't have a lot of money and when the drought came, they prayed to St. Joseph, 'If you bring us rain, we will provide this table in thanksgiving to you and we will feed the poor,'" Klomp said. "That was the beginning of the table."

After being blessed by a priest, some perishable items from the table will be buried outside the church. Food items that can be preserved are packaged for community shut-ins and donated to the Pueblo Soup Kitchen. Cakes are donated to the YWCA.

"We can't sell anything at the St. Joseph's Table," Klomp said. "It's all just an offering to St. Joseph."

Klomp, the daughter of late Avondale rancher Pete Pisciotta, remembers visiting extended family members' St. Joseph's tables as a child. Home tables were often prepared as a way of giving thanks after a family member came back from war safely or recovered from illness.

"There used to be several tables in the homes... but this was several years ago," she said. "Most of those people who had those home tables are now deceased.

"It has been around a long time in our community and we are trying to carry it on," she said.

Pueblo Chieftain reporter James Bartolo can be reached by email at This email address is being protected from spambots. You need JavaScript enabled to view it. 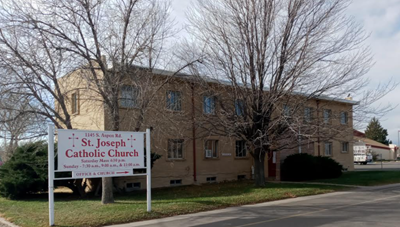